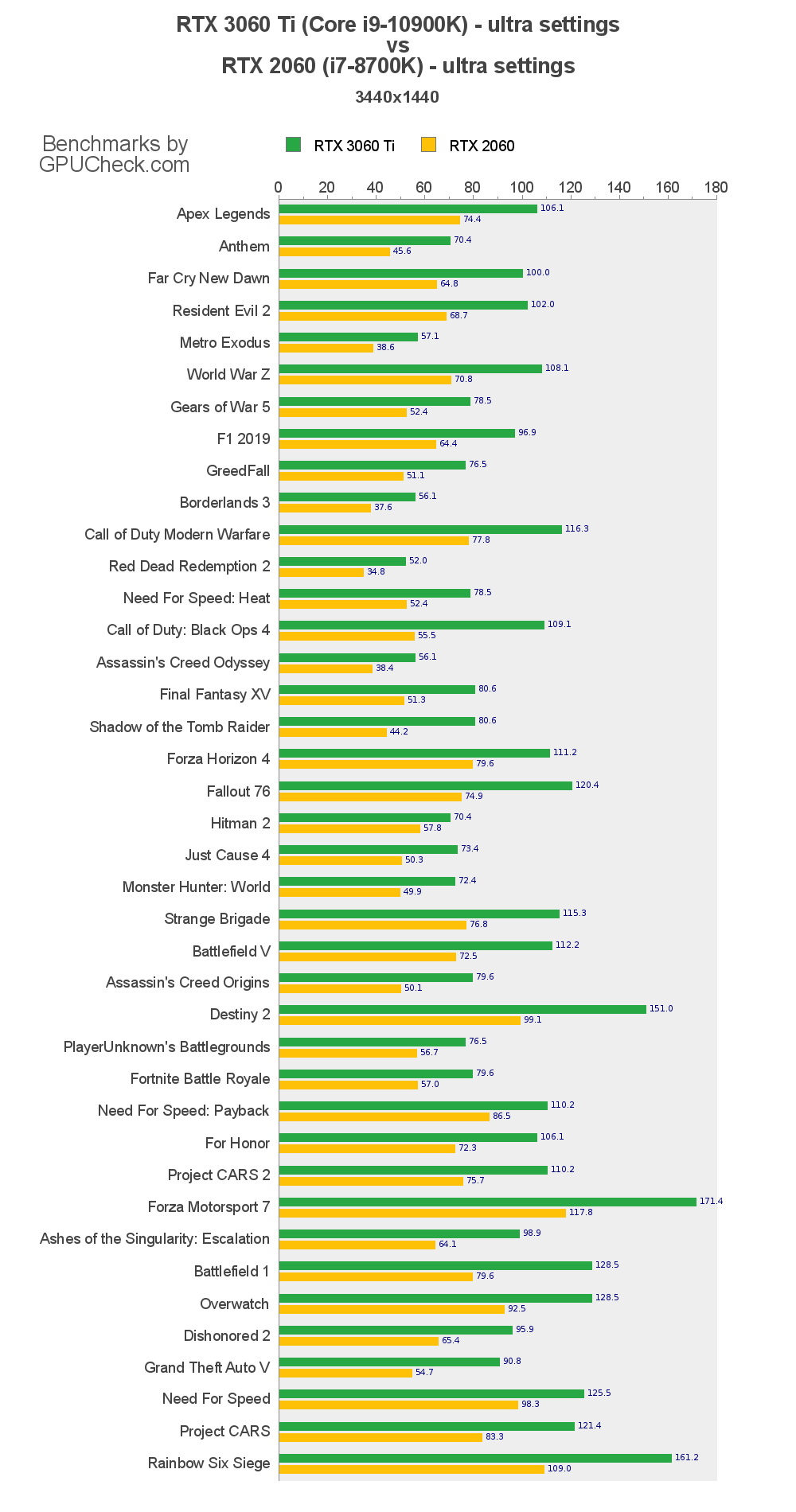 Should you buy an RTX 3060 laptop, or save some money and get the older and cheaper RTX 2060? I’ve compared both laptops in 15 different games to show you all the differences! These are the differences in specs between these two laptop GPUs. The newer RTX 3060 has double the CUDA core count and a higher boost clock speed. They both have 6 gigs of GDDR6 memory, the power limit ranges differ a bit, and ultimately this will affect performance I’m using my Lenovo Legion 5 for the 3060 laptop and the Eluktronics RP-15 for the 2060, as they both have about the highest power limits available, though the 3060 can go higher with dynamic boost.

Most 2060 laptops have 80 or 90 watt power limits best case, so although my comparison will be fairer in the sense that these two laptops have similar power limits, many 2060s may perform slightly below what I’ll be showing. Now the older RTX 2060 model is only available with last generation processors. I’m pretty sure you can’t get it with either Intel 11th gen or AMD’s Ryzen 5000 because all of those newer processors are just paired with Nvidia’s new RTX 30 series. Now unfortunately this does mean that some of the differences shown in this comparison will be a result of those CPU differences, but at the same time I think this is pretty fair, because if you’re actually buying an RTX 2060 laptop you’ll be stuck with a last gen processor anyway.

Both of these models still have 8 core Ryzen chips so I think they should be pretty comparable, but we can also try and mitigate the processor differences by focusing on games at the highest setting presets, as those are generally more GPU bound.

Both laptops were tested with the exact same memory kit installed, the same Windows updates and same Nvidia drivers. Now the Legion 5 has a MUX switch which lets us disable optimus and will improve performance in games, so all testing has been done with that, but the RP-15 on the other hand does not have that feature, so in order to keep all of the results comparable testing on the RP-15 was done with an external monitor connected directly to the Nvidia graphics bypassing optimus.

So basically just to summarize, I believe this should be a pretty fair comparison, so with that out of the way let’s start out by seeing how well both laptops perform in 15 different games. Then afterwards we’ll check out things like content creator workloads, power draw and price differences. Red Dead Redemption 2 was tested with the games benchmark.

I’ve got the newer RTX 3060 results shown by the purple bars, older RTX 2060 results shown by the red bars, and along the left are all the available setting presets, with lowest down the bottom and highest up the top. The 2060 is still giving reasonable results and is close to 60 FPS at high settings, however at ultra where we’re most GPU bound the 3060 was reaching 40% higher average FPS. This game recently added DLSS support after testing, so they could both get further gains by enabling that. Cyberpunk 2077 was tested with the exact same run through the game on both laptops, and at regular ultra settings without ray tracing the 3060 was 36% faster than the 2060. If we instead compare the result at the top with ray tracing and DLSS set to quality, well the 3060 has a massive 90% gain to average FPS, so it would appear that the updated RT and Tensor cores are helping out.

It’s not all big gains though, in Assassin’s Creed Valhalla both laptops were hitting the same average FPS at max settings, and for some reason the 1% lows on the older 2060 were actually slightly ahead, but otherwise at all other setting presets the 3060 was ahead in the averages. Control was tested with and without ray tracing, let’s start with ray tracing off results. This is a GPU heavy game, which is why the differences at high settings are well above average when compared to the other 14 games tested.

The 3060 was reaching 46% higher average FPS, and even its 1% lows were ahead of the 2060s averages at all setting levels. With ray tracing enabled there’s a slightly larger 48% gain at high settings to the 3060, while only low settings with ray tracing was able to hit above 60 FPS on the 3060.

That’s where DLSS comes in to boost performance, and this was now able to offer a 50% higher average FPS at max settings in favor of the 3060, again likely helped out by its newer RT and Tensor cores, though the gains were nowhere near as big as what we saw in Cyberpunk earlier.

Watch Dogs Legion had below average improvements with the 3060, giving us 25% higher average FPS at the highest ultra setting preset, though there’s a larger 38% boost to the 1% lows. This is another game that has DLSS support, so the FPS of both could be further pumped up by turning it on. The differences in Microsoft Flight Simulator were higher, at max settings the 3060 was reaching 35% higher average FPS with even the 1% low above the 2060s averages, though the gap was much lower with low settings. Fortnite was tested with the same replay on both laptops, and there were above average gains to be had with the 3060 laptop here which was reaching 40% higher average FPS at the highest epic setting preset compared to the 2060, and this is another title where DLSS could be used if you’re after even more FPS.

CS:GO is another esports title, however there were much smaller differences in this one as the GPU doesn’t seem to make as big of a difference compared to the CPU.

The 3060 laptop was just 15% higher in average FPS at max settings, but much of this may be due to Zen 2 vs Zen 3 differences. Rather than talk through the rest of the 7 games individually in depth, I’ll just blast through them so we can get into the fun stuff even if this was hours of work. Feel free to pause the video if you want a closer look at these additional games. More games is important to help get a better rounded average.

On average over all 15 games tested at 1080p with the highest setting preset, the newer RTX 3060 was 34% faster than the older RTX 2060. This is a reasonable improvement in a single generation, but it’s also nothing super amazing that I’d be running out to upgrade to if I already had a 2060 laptop.

As laptop graphics are almost always soldered to the motherboard, upgrades involve replacing the entire machine. Here are the results from 3DMark. The 3060 in the purple bars was always ahead as expected.

It’s scoring 29% higher than the 2060 in the Firestrike graphics score, 36% higher in the Timespy graphics score, then 41% higher in the Port Royal ray tracing test, so some similar margins to what we saw in the games. Just before we get into the price differences, I’ve also compared both laptops in a few content creator workloads, because believe it or not it’s not all just about gaming, crazy right? I’ve tested DaVinci Resolve with the Puget systems benchmark. This test mostly depends on GPU power, and the RTX 3060 was scoring 18% higher than the RTX 2060 in this one, but it’s worth noting the 2060 score is like 30 points behind a 1660 Ti that I recently tested with same CPU. The differences in Adobe Premiere were much smaller, generally this test doesn’t see as big of a difference from just the GPU, the CPU seems to affect the score more.

The differences were much larger in Blender with CUDA, probably due to the CUDA core count differences. The 3060 completed the longer Classroom render test 55% faster than the older 2060. The V-Ray test also uses the GPU to render a scene, and the 3060 had big gains in this one as well as it’s another CUDA test, scoring 39% higher than the 2060. SPECviewperf tests out various professional 3D workloads, and the 3060, shown by the purple bars, was ahead in all of these tests, though the amount it’s ahead by could vary significantly depending on the specific test. Great, so the 3060 performs better than the 2060 as expected, but how much more money does it cost, and is it worth it?

Prices will of course change over time, so refer to those links down in the description for updates. The RP-15 could be picked up for under $1200 USD last year, and while they don’t seem to be selling the 2060 configuration anymore, there are other options out there, just be wary of cheaper models likely having lower GPU power limits, which will result in lower performance.

The newer 3060 model of the RP-15 with the same CPU is $1500, and hey that must be one of the only laptops that pairs a last gen CPU with the 3060, I guess that would have been perfect for this comparison but I couldn’t get one. Anyway that one has a full wattage 3060 too, just like the legion 5 I tested here. As far as cost per frame goes, the 3060 was actually able to offer better value despite costing more when in the RP-15, or in the Legion 5 when on sale, while the full priced Legion 5 was a little worse value compared to an RP-15 with 2060 graphics.

It can still do quite well in a number of modern games, you just might have to turn the settings down a little bit compared to what the 3060 is able to offer, and unlike the GTX 1660 Ti below the 2060, the 2060 does still at least offer DLSS.

Technically it’s got ray tracing too, but the first gen ray tracing hardware and this lowest end 2060 model never really impressed me in that area, but personally I think DLSS is actually more practical for most people. Unfortunately I’m not able to fairly compare things like thermals and battery life on both of these laptops as the internals are different. Neither laptop was thermal throttling on the GPU when under testing though, so I think all the results shown are still perfectly comparable.

Check out these videos next if you want to get a better idea of how well the RTX 3060 compares against other laptop GPUs. Make sure you’re subscribed to the channel for future laptop comparisons like this one, and come and join me in Discord and get behind the scenes videos by supporting the channel on Patreon.